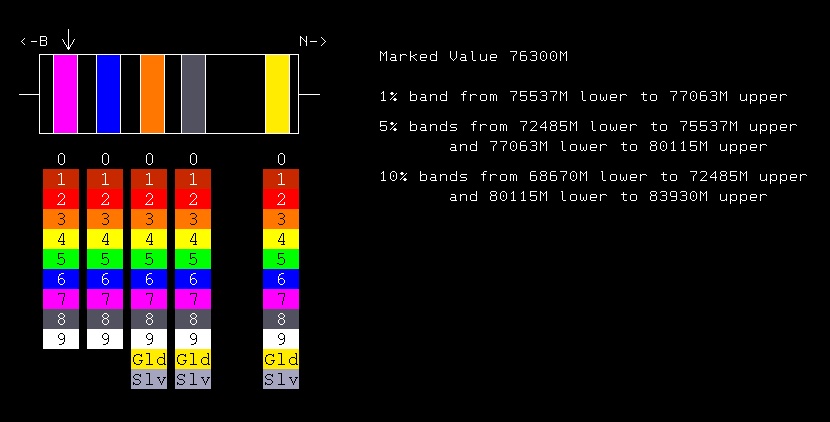 ADD 1 smile-point to the already granted 39
This program was made for CMM1&2 BASIC Programming Challenge 2021 (one screen programs max. 48 rows by 100 columns)
Video on YT about this program is HERE.

The marked tolerance value on resistors is only a guide. In actual fact, resistors are selected on test for their tolerance after manufacture. It's unlikely that you'll find, say, a 5% resistor that's within 1% of it's marked value as those will have already been removed and sold as 1% resistors. Because of this, a resistor actually has two likely value bands, one above it's marked value and one below.
The enclosed program attempts to show these value bands, with a graphical interface to set the value of the resistor. Simply move the band indicating pointer using the B and N keys and press a key 0-9, S or G (silver or gold) to set the band colour. The value information at the right hand side is updated automatically.
The tolerance band will also show the more unusual closer tolerances that are available, although only 1%, 5% and 10% are calculated here. Many old resistors are 20% tolerance but this band hasn't been shown as it's unlikely to be of much interest now.
The program illustrates quite nicely how unlikely it is that you'll find a resistor that is exactly it's marked value.